The 2017 Diversity in Cannabis survey, conducted by New Frontier Data and Women Grow, sheds light on the current state of diversity within the legal industry and provides insight into the types of challenges faced by its growing workforce. More than 1,700 participants completed the survey, allowing for a broad range of perspectives on issues from their reasons for joining the cannabis industry to their experiences with gender and racial discrimination.

While the cannabis industry has been successful in providing additional opportunities for women and minorities, it still has some of the key characteristics of a startup industry in a nascent space. Key issues facing employees include low pay and limited benefits, if any. Additionally, the industry is largely made up of privately held companies, as individual corporate growth has been constrained by federal prohibition.

While the industry shows high levels of gender diversity (relative to other industries), the same cannot be said for its racial diversity. Among the survey respondents’ companies, women occupy positions of power and are included in positions across all levels of the organization. However, comparatively, racial minorities constitute very few positions of upper management and ownership.

While the cannabis industry shows high levels of gender diversity, the same cannot be said for its racial diversity.

With 40% of respondents saying they’ve invested in cannabis companies, and nearly 60% reporting they took equal or less pay when they joined the industry, the workforce in cannabis is clearly committed to the industry. That commitment is further highlighted by the large number (40%) who work more than 20 hours a week in their cannabis jobs. The extent to which people in cannabis have been willing to invest their time and money advancing the industry’s growth underscores the commitment of industry stakeholders to the success of the industry.

More than 74% of respondents felt that businesses should do more to encourage greater racial and sexual diversity in the industry. However, less than one-third of businesses have adopted policies to ensure the recruitment and retention of a diverse workforce. Achieving the diversity outcomes sought by a large majority of the industry will require more companies to be more active in their approaches to increasing diversity, including through establishing formal policies intended to attract a more diverse workforce.

As consumer research around cannabis has grown, the industry has begun to better understand the unique drivers of consumption and product preferences across various consumer subgroups. Understanding these behavioral differences and tailoring the development and marketing of cannabis products to each group’s unique behaviors in the industry is an opportunity to both differentiate their brand in an increasingly crowded market, as well as build customer loyalty within specific communities of cannabis consumers.

Based on the responses of the survey group, the cannabis industry appears to offer greater opportunities for women to advance to positions of power, and less gender discrimination, than other industries. Roughly 30% of respondents reported that women occupy all positions of ownership at their companies, and 57% reported working for companies that had an ownership team where at least half were women. 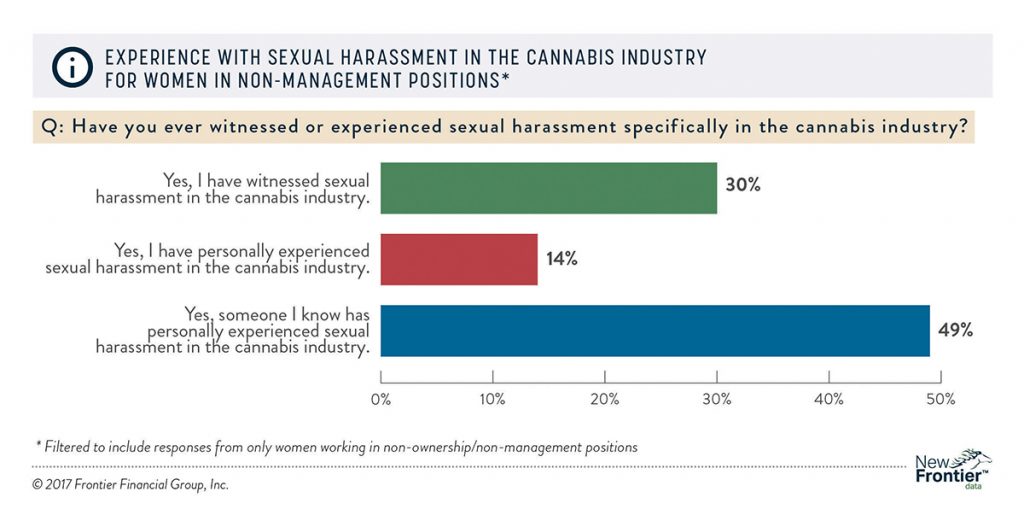 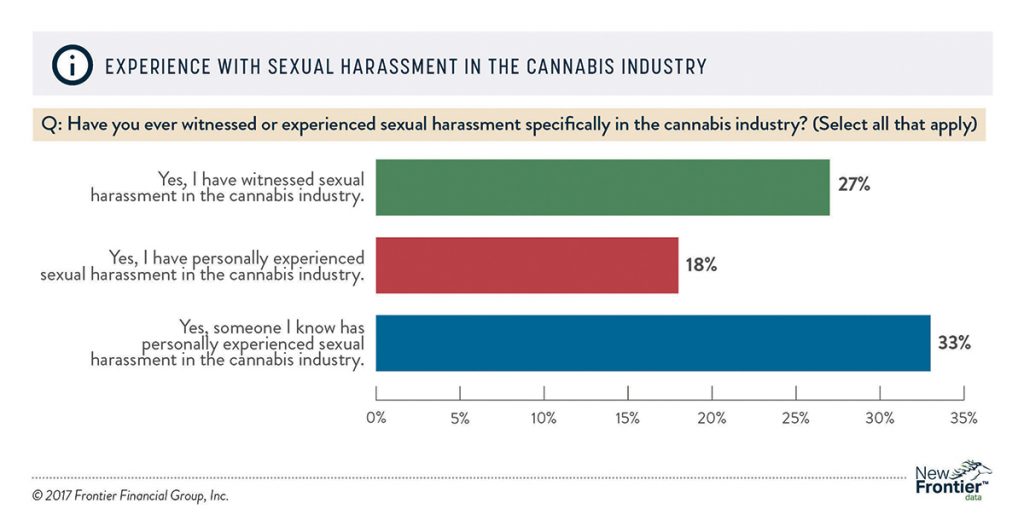 Sexual harassment is a widespread issue in the cannabis industry with 45% reporting they’ve either witnessed it or have experienced it themselves.

The findings were similar for upper management. Approximately 25% of respondents reported women occupy all management positions and 58% reported management teams were at least half women. While there’s a high level of female participation among cannabis companies, the same is not true for racial diversity.

When survey results are filtered to show only responses from minorities, the view that racial discrimination is a moderate or major industry issue rises from 45% to 65%, reflecting the fact that those who don’t belong to minority racial groups may be less familiar with the discrimination minorities experience in the sector and therefore are less likely to perceive as a major issue.

Sexual harassment is a widespread issue in the industry, with nearly half (45%) reporting they’ve either witnessed it (27%) or have experienced it themselves (18%). An additional one-third reported that they knew someone who’d been sexually harassed in the industry.

While it’s clear from the survey responses that many believe diversity to be important, and many believe that companies should implement strategies to improve diversity at their company, women and racial minorities are still underrepresented in the industry. Fifty-eight percent of survey respondents believe that limited knowledge about how to best integrate a diverse workforce into corporate culture is a barrier, and the same percentage attribute that barrier to the lack of commitment among company leadership. Another 55% believe that the barriers exist due to a general lack of awareness about racial and gender diversity. Fifty-four percent report a lack of diversity-specific targets in recruiting efforts. 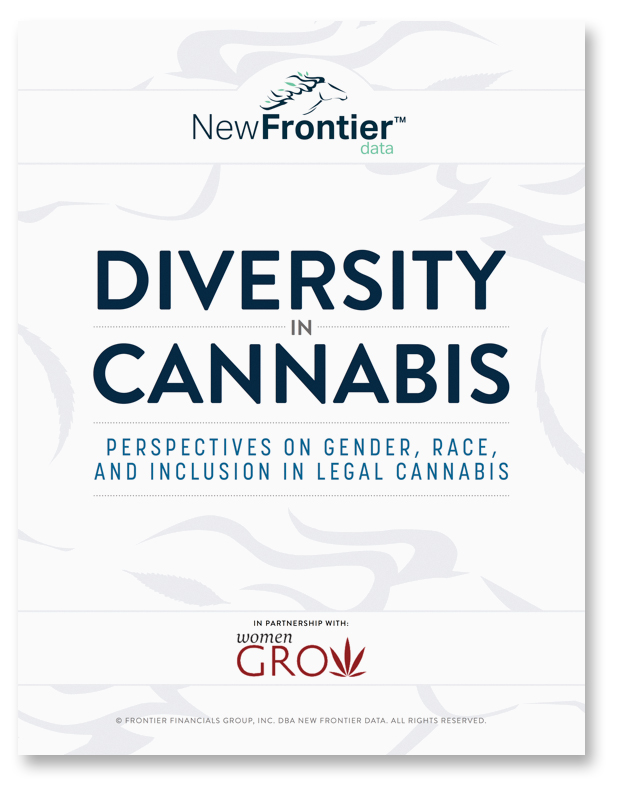 However, it’s widely viewed that diversity is important among survey respondents: almost three-quarters (74%) of respondents agree that businesses in the cannabis industry should set targets to encourage greater racial and sexual diversity, and 62% believe that state government should prioritize diversity when evaluating candidates for cannabis business licenses.

Cannabis business groups like Women Grow, the Minority Cannabis Business Association, Latinos for Cannabis and the Hood Incubator, along with advocacy groups like Decode, are working to educate minority communities on opportunities in legal cannabis in an effort to increase their participation in the industry. However, continued exclusion of people with convictions for cannabis offenses (especially among older communities of color) will require sustained effort to close the industry’s racial opportunity gap.

Excerpted from Diversity in Cannabis: Perspectives on Gender, Race and Inclusion in Legal Cannabis by New Frontier Data in association with Women Grow. Reprinted by permission of Frontier Financials Group, Inc. The complete survey is available for $149 at newfrontierdata.com.

If you enjoyed this Freedom Leaf article, subscribe to the magazine today!