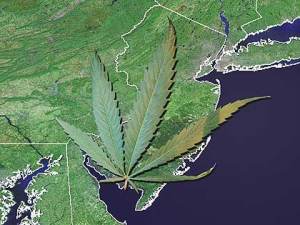 A referendum that would make marijuana legal for those 21 and older, which is being voted on in less than two weeks, is supported by almost 2/3rds of all voters in New Jersey, according to a newly released poll.

The  Brach Eichler Cannabis Poll found that 65% of likely voters in New Jersey either strongly or somewhat support the marijuana legalization referendum. On the opposite side, just 29% say they are opposed to the referendum, with 6% undecided (meaning if every undecided voter decided to vote “No”, the referendum is still on track to win with a margin of 30%).

“While we are seeing some ads regarding the referendum, there seem to be far fewer than for previous referenda,” John Fanburg, co-chair of the cannabis practice at Brach Eichler, said, told NJ.com. “We are also seeing increased awareness of the initiative in the past three weeks, meaning voters have been reading press reports or investigating the issue on their own and not relying on one-sided ads to educate themselves.”

As NJ.com noted, Brach Eichler “is a law firm that stands to benefit from legalization, and has worked with DKC Analytics to conduct four polls on the ballot question.”

As pointed out by High Times, “A bill introduced in the New Jersey state legislature last year to legalize recreational marijuana went up in smoke after lawmakers walked away from the legislation. In its place, legislators passed a bill to leave the matter up to voters in 2020. Under the proposal, adults in New Jersey aged 21 and older would be able to use marijuana recreationally, while the state would have the power to levy taxes on pot. The measure also calls for the creation of a state commission to regulate the new marijuana industry.”

Democrat Craig Coughlin, the speaker of the New Jersey Assembly, said at the time that putting “the issue to a referendum is both sensible and equitable.”

“While not our preferred method of legislating, public questions allow voters to affirm or deny massive shifts in public policy,” Coughlin said in a statement. Coughlin added that the “time to end the prohibition of adult-use cannabis is now.”

According to NJ.com, “The ballot question asks voters to decide if New Jersey should legalize marijuana for those over 21 and establish a new, taxable industry. While the number of residents who favor legalization has grown in recent years, Democrats in the state Legislature could not muster the necessary votes to pass a legal weed bill. They abandoned the effort last fall and moved to put the question to voters on the 2020 ballot.”

The Brach Eichler poll was conducted between October 5-October 13 through interviews with 500 likely New Jersey voters. It has a margin of error of 4.4%