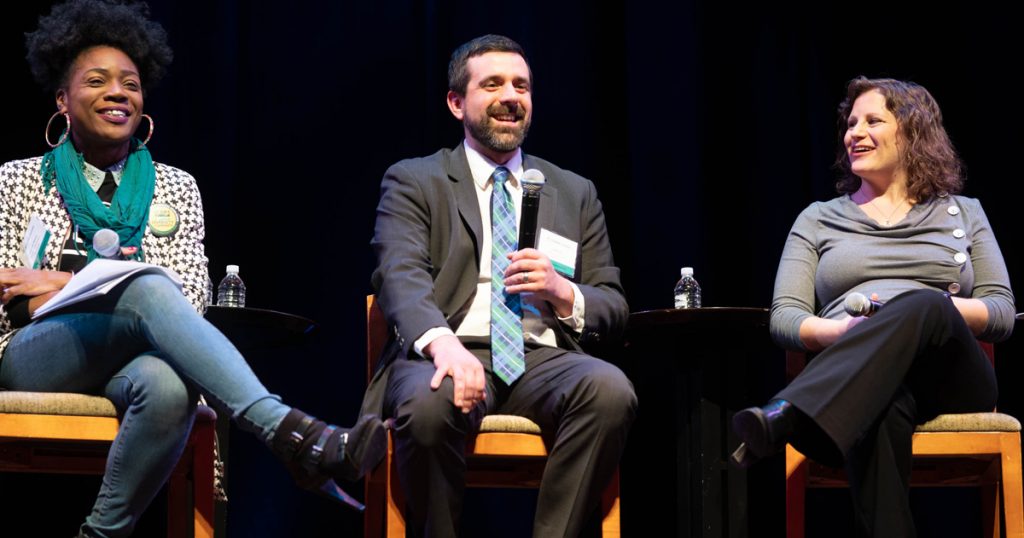 “We’re closer than we’ve ever been before,” Scutari stated. “However, if I thought we were all done, I’d be the first person calling a press conference.

This was a major topic of discussion at Accelerate Cannabis four days later on February 19 at the New Jersey Performing Arts Center (NJPAC) in Newark. About 150 business people, officials, activists, lawyers and service providers gathered to share ideas about legalized pot in the Garden State. Speakers on a series of panels discussed a wide range of topics from dealing with municipalities to developing new products.

The tax issue had become a stumbling block after the bill passed in two committees and went to the full House and Senate for debate in November.

DASHEEDA DAWSON: “The face of cannabis has changed and no one on Main Street knows that yet. People need to be re-educated because in some ways we’ve been hoodwinked.”

The state is also working on expanding its existing medical program. After a competitive process wrapped up last year, the Department of Health awarded six new licenses, doubling the number in the state to 12.

New Jersey currently has 41,000 pot patients, more than double the 17,000 when Murphy took office in 2108. The health department has also reduced the fees to participate in the medical program from $200 to $100 and now offers discounts to seniors.

“I want to see those fees continue to come down,” noted assistant health commissioner Jeff Brown, who’s responsible for oversight of the cannabis program. “We’d like the industry to bear the brunt of running the program instead of the patients… We need to get rid of the sales tax on medical cannabis and the rule that patients have to go back to their doctor every 90 days. It should be once a year to check in.” The tax is 7%.

Troy Kaplan, director of new markets for new state licensee, the Chicago-based Verano Holdings, believes New Jersey is an attractive market for businesses, especially for bigger integrated cannabis companies. “Most of these larger companies want to plant their flag in every state,” he commented. “In New Jersey, with the new governor and enhancements in the program, it just made sense to be here.”

The message that cannabis is an effective medicine for many aliments such as arthritis, Lupus and anemia has been lost in all the noise, Dasheeda Dawson, founder and CEO of MJM Strategy, contended. “The face of cannabis has changed and no one on Main Street knows that yet,” she noted. “People need to be re-educated because in some ways we’ve been hoodwinked by Big Tobacco, Big Paper and Big Medicine.”

DEBRA BORCHARDT: “If you’re a female-led company, you have to work twice as hard and twice as many hours to get half the money the guys are going to get.”

Dianna Houenou, policy counsel for the ACLU of New Jersey, has been working with lawmakers to push for criminal-justice reform in the legislation, including expunging records for people convicted of marijuana infractions. “We want to see meaningful access to jobs and business opportunities,” she stated. “Advocacy groups have been shouting at the top of their lungs explaining the injustice. You cannot do this work without affirmatively addressing the War on Drugs was created with racist intent.”

Discrimination also extends to women seeking venture capital funding for cannabis businesses, Green Market Report’s Debra Borchardt CEO and co-founder related. “If you’re a female and thinking of raising money, you should know that men just want to invest with other men,” she observed. “The amount of money that women-owned companies raise is far, far lower. I’ve seen men with less experience raising money with just an idea. Then you’ll see a woman-led company with profits and doing everything right and they’ll be like, ‘Well, I don’t know.’ I’m just being honest. If you’re a female-led company, you have to work twice as hard and twice as many hours to get half the money the guys are going to get.”

Panel host Ellie Siegel, CEO of Longview Strategic, which produced the event, recommended that future retail store owners begin early and build a team of service providers, such as security specialists and financial planners. “Now is the time to be situating yourself,” she expounded. “You can’t go in there without a plan. You need to put things in place by deriving what information you can from data points and start to put one foot in front of the other.”

Summing up the general feeling of excitement in the building, Tara Sargente, executive director of the New Jersey Cannabis Industry Association, said it’s about time that adult-use legislation passes in her state. “I don’t believe the sky will fall,” she told Freedom Leaf.  “The sky hasn’t fallen in other states. In fact, it’s been a significant fiscal boom.”

Crowds Line Up for Legal Weed in Massachusetts