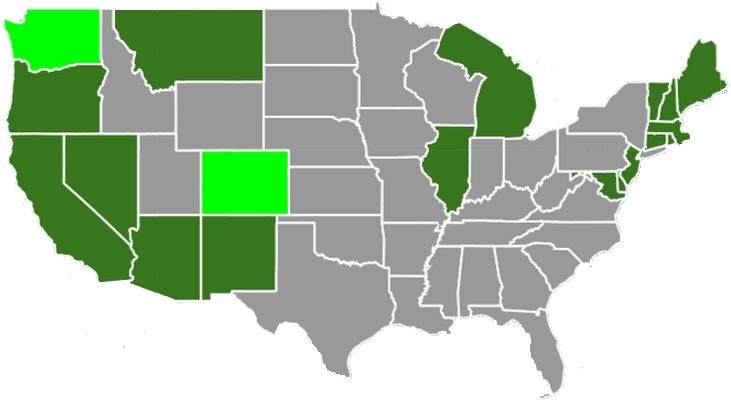 Considering the fact that this society is run on money, and that money talks and people listen, it is not surprising that the attitude towards marijuana is changing quickly.  Even Republican lawmakers have been quoted as saying positive things about the cannabis plant.  Why might this be?

Well, one of the obvious big reasons is that, in all of the states where marijuana is legal for either medical or recreational use, there is a financial gain that is being passed onto the municipality itself.  In other words, it is taxed in every state where it is legal, and the revenue it is generating is already in the millions of dollars PER STATE, per year.

In states that have been in financial trouble, this has been a huge blessing.  So, of course they want it to continue, and in most cases they want it to expand.  States where medical marijuana is legal have begun to push for ballot initiatives legalizing marijuana for recreational use, for the tax and revenue benefits this will undoubtedly provide.

This is understandable, since there is only so much a state can reasonably charge for a medicine or a drug, such as medical cannabis.  This limit does not exist as readily for a recreational substance, though.  People are much more willing to accept high taxes when it comes to recreational marijuana.  They are not so eager to pay more tax on a medical substance, such as in Arizona, where lawsuits have already been filed to bring down the fee for access to medical cannabis.

There are no similar lawsuits for the taxes placed on recreational marijuana, although if lawmakers take the tax from reasonable to outlandish, those types of lawsuits might be forthcoming.   If the taxes are not an undue burden, and are similar in level to the sales tax levied against cigarettes, then it is likely that they will stand.

Of course, this means that the states in which recreational marijuana is legal, not only are there hundreds of thousands of new jobs created, and billions in revenue for the industry itself, which also means economic growth, there is also in most cases a surplus of revenue for the state itself.

This means they can build and repair roads that have been neglected due to lack of money.  Municipalities can build new roads into underserved areas, thereby allowing for greater accessibility to transportation.  Cities and towns can build and maintain other infrastructure, such as better schools, libraries, transportation routes, and even municipal hospitals in states where these exist.

So, the country and the world is looking to the recreational marijuana states, such as Colorado, to see what they could do with all this surplus money, and this is driving the interest in recreational marijuana.  Colorado, as an example, received almost $250 million in sales tax revenue in 2017 alone.  This is with their recreational cannabis sales tax rate moving from 10% to 15% in July of that year.  And their revenues are likely to continue to increase as more people from other states make a decision to move to Colorado because of their marijuana laws, and as more of the population becomes interested in recreational or medical marijuana. 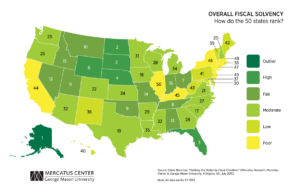 Map of the states ranked by fiscal solvency, from tfhawaii.org

So what are the implications for society?  As other states and lawmakers see these revenues increase in Colorado, and begin to increase in states where it is just becoming legal, they are likely to look favorably on the cannabis industry.  This has already happened in Congress, where the response to the Cole Memo announcement has been to put a new bill before them to legalize marijuana across the country, or to decriminalize it.  It would then become up to the states to tax the sales of cannabis as they see fit.

In addition to this, many of the poorer municipalities are giving recreational cannabis a second look, since they could certainly find ways of using a revenue surplus to help their counties and populations.  So, it is likely only a matter of time before the vast majority of states have legalized marijuana for personal use, thereby making these states more prosperous.

Prosperity in municipalities, if used properly for the benefit of the populations, makes those populations more prosperous as a whole.  And this is not even talking about the millions and millions of new jobs that have been created as a result of both medical and recreational cannabis!  Every state wants to create more jobs for their citizens, and this is a super easy way to do it.

Just make cannabis legal, and suddenly the majority of your population will be gainfully employed.  From growers to distributors, retailers and dispensaries, cannabis is creating jobs that people love, doing something they enjoy, and making counties richer, little by little, all across the country.  And all this while, there have been zero deaths due to marijuana overdose.  With a heroin crisis plaguing the country, this may be just what is needed to turn everything around for this society.